Annually on the ninth day of the eighth lunar month, thousands of people flock to the Do Son stadium to witness the attractive performances of buffaloes within the festival, an outstanding and unique in Vietnam which is associated with different legends. One of the legends has it that long time ago, one Creator caused a severe drought. All living things looked toward the sea, praying for Creator’s favour. In the most miserable moment, suddenly people saw two buffaloes fighting fiercely on the wave crests and the rains started to pour down, reviving all creatures.

Local people organise the fighting performance annually to show not only their gratitude for Sir Buffalo but also their desire for the immortal vitality and strength of coastal people of Hai Phong. Held officially and annually since the 18th century, the festival is a chance for local people to pray for prosperity and happiness

However, after watching the event, many people wondered whether such an event should be maintained in the modern time?

Buffalo fighting is to see how strong buffalo, which trongest, but the buffalo back strong winning the final butchered, and buffalo meat that is sold expensive, is considered as blessing to those who purchase it.

There may be a popular belief in this culture, and how this life Do Son Buffalo Fighting Festival maintains this tradition, but recently it has been suggested that won butchered buffalo fighting, more is openly butchered, sold openly, and people buy that buffalo meat is blowing excited huh, is a scary thing, not consistent with the festive spirit of charity towards people. 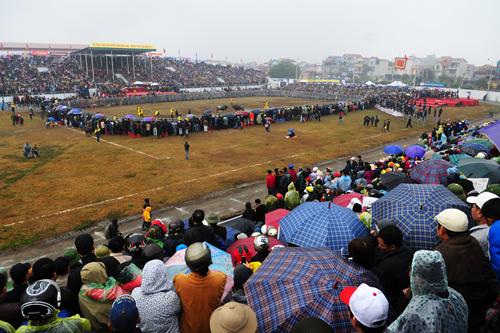 Thousands of people watch the competition in rain. 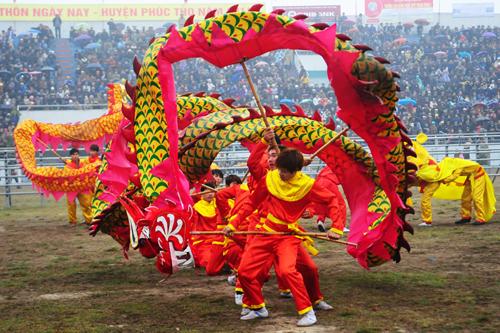 The dragon dance opens the event.

The buffalos – the festival’s main character – appear in the audience cheering.

The competition attracts 32 buffalos. They were divided into 16 pairs for the qualifying round on February 22. Eight pairs were chosen for the finals on February 23.

To ensure the safety of the audience, the organizers set a steel fence. 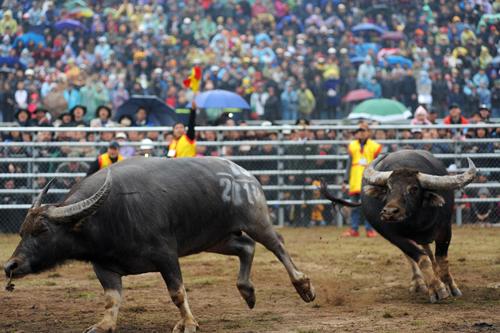 A pair of buffalo after the fight. 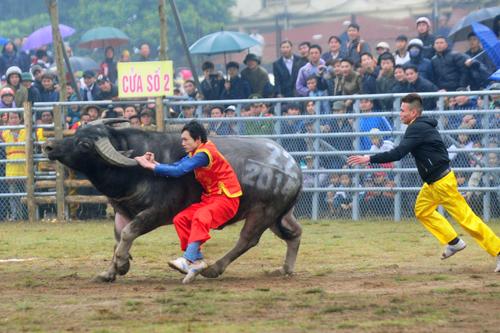 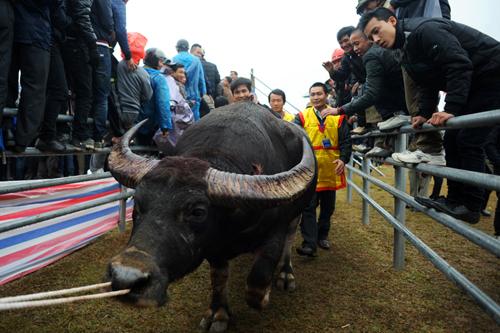 A winning buffalo leaves the “mat” with the audience cheering. 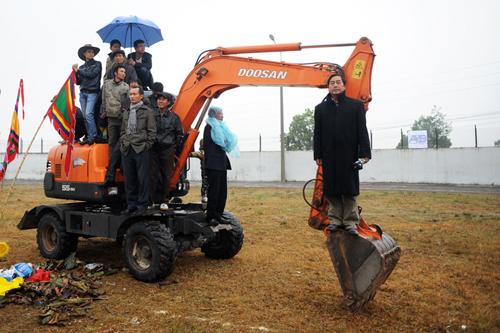 The organizers prepare an excavator to move dead buffalo out of the playground.

A man is disappointed when the buffalo of his home team lost in the fight. 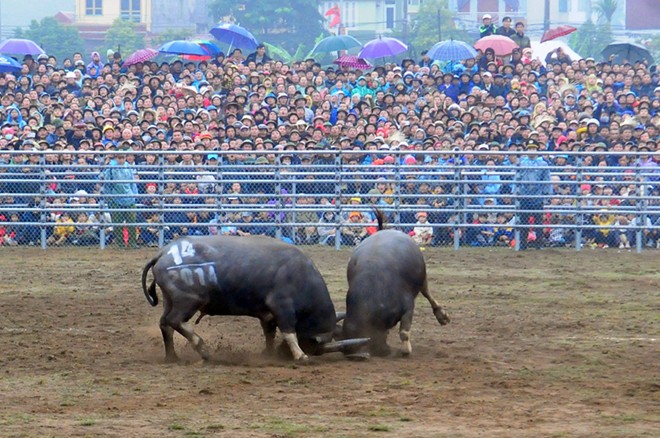 The fiercest fight is the one between the buffalo of Mr. Hoang Van Toan from Do Son town, Hai Phong city and the buffalo of a company from Phuc Tho district, Hanoi. The buffalo from Hai Phong was killed immediately in the first second of the fight, after being butted but its rival. 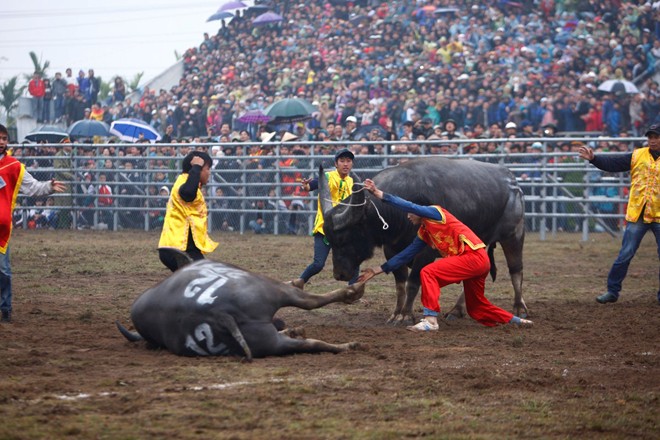 Tens of thousands of spectators were surprised. 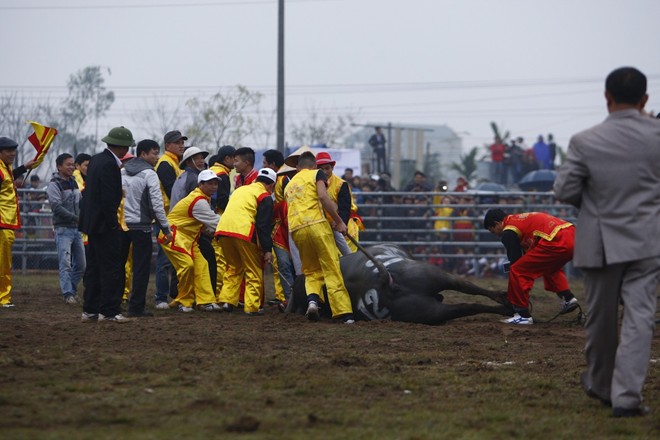 The dead buffalo was pulled out by 20 people. 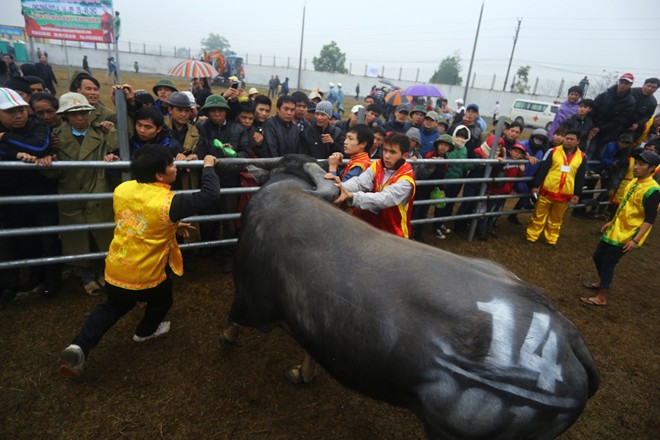 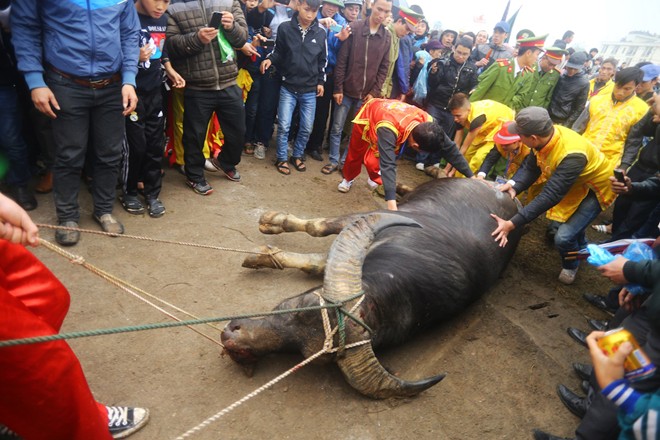 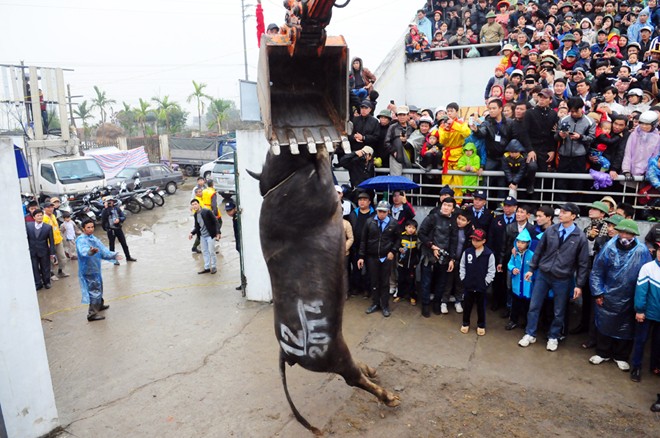 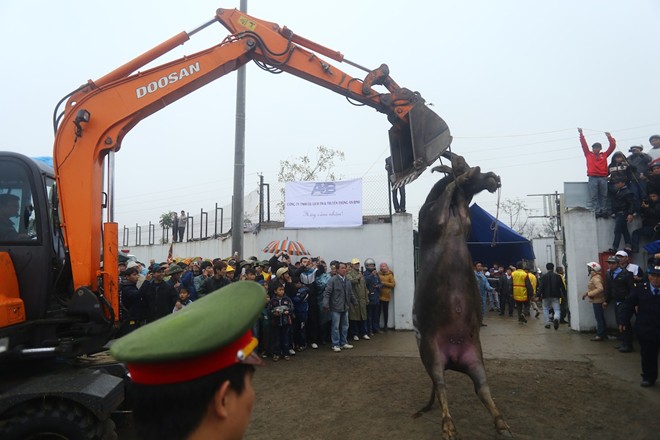 It was then loaded by an excavator to the slaughtering house.